We're celebrating our Chronogram #Chronogrammie WIN for BEST BAND! Watch the WINNERS video below, they used "Very Happy Now" as the soundtrack... pretty sweet (we're 5th in the sequence, footage of the Falcon Ridge Folk Festival!) Your Votes made the difference!!!

80 bands were nominated, 5 finalists - and then you got us over the finish line, so do a little Victory Dance with the Winners!!! SEE VIDEO - https://youtu.be/SCe7wgLcjMI (ALSO VIEWABLE ON OUR HOME PAGE)

Since the first round of voting kicked off on January 1, close to 20,000 readers participated, casting over 300,000 ballots for their favorite shops, restaurants, cultural venues, and organizations across a whopping 247 categories. That’s almost double last year’s numbers, and they are still counting...

We are FINALISTS in CHRONOGRAM MAGAZINE'S "BEST OF" AWARDS!
This Reader's Choice Award is awarded by YOU - So VOTE NOW!
VOTING BEGINS APRIL 1ST for the Final Round!!!

CATEGORY: Arts & Entertainment / Local Band Musician
Finalists go to the 2nd round of voting April 1st. All nominations and votes are added together for final winners. #Chronogrammies 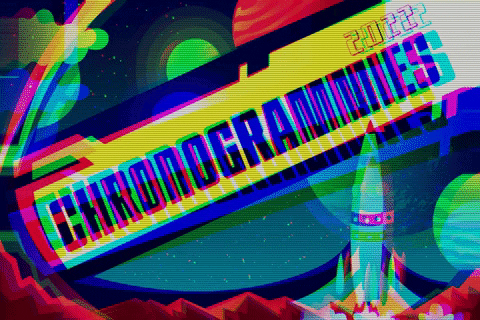 INDUSTRY NEWS: You all heard the news last week, the 2022 Recording Academy / GRAMMYs were indefinitely postponed, but GREAT NEWS - The Slambovian Circus of Dreams have been Nominated by Chronogram Magazine's 2022 Readers’ Choice Awards for a "CHRONOGRAMMIE"!!! Chronogram Magazine is a really cool #upstate New York arts and culture publication in the region. If you are from #Slambovia your vote counts more!
This Reader's Choice Award is awarded by YOU - So VOTE NOW!

CATEGORY: Arts & Entertainment / Local Band Musician
Nominations are open til Feb 15th. (Finalists go to the 2nd round of voting April 1st. All nominations and votes are added together for final winners.) #Chronogrammies 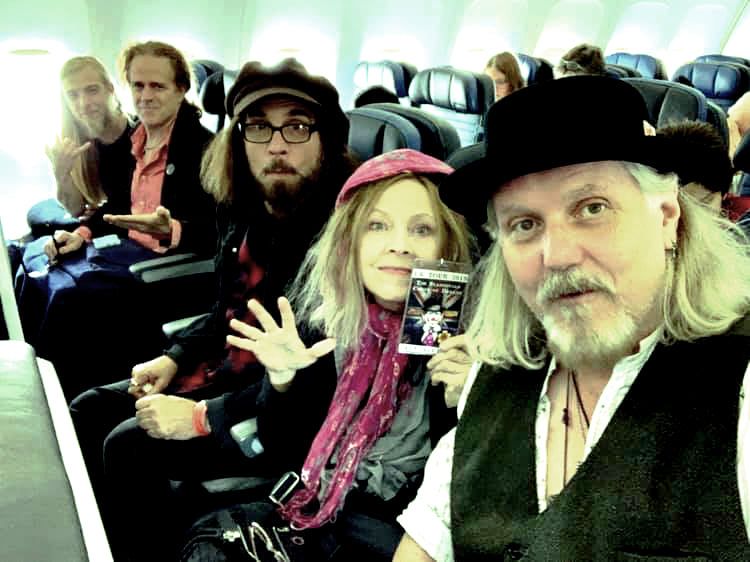 Special Tour Announcement: The band has been in a holding pattern for a few months concerning the UK Tour 2021... (see picture below!) We heard the news this weekend from the oh-so-gracious Gareth Williams of Fairport's Cropredy Convention that the UK will NOT be able to insure any festivals this season due to COVID.

So our tour will be moved to August of 2022! The Wickham Music Festival, Fairport's Cropredy Convention, and several other festivals and clubs are all on board. Many thanks to all who worked so hard to make it happen during all the uncertainty, especially our UK agent, Jonti Willis.

And to our lovely UK fans: We'll play every town from the highlands of Scotland to #Newcastle and #Penzance! - Tink 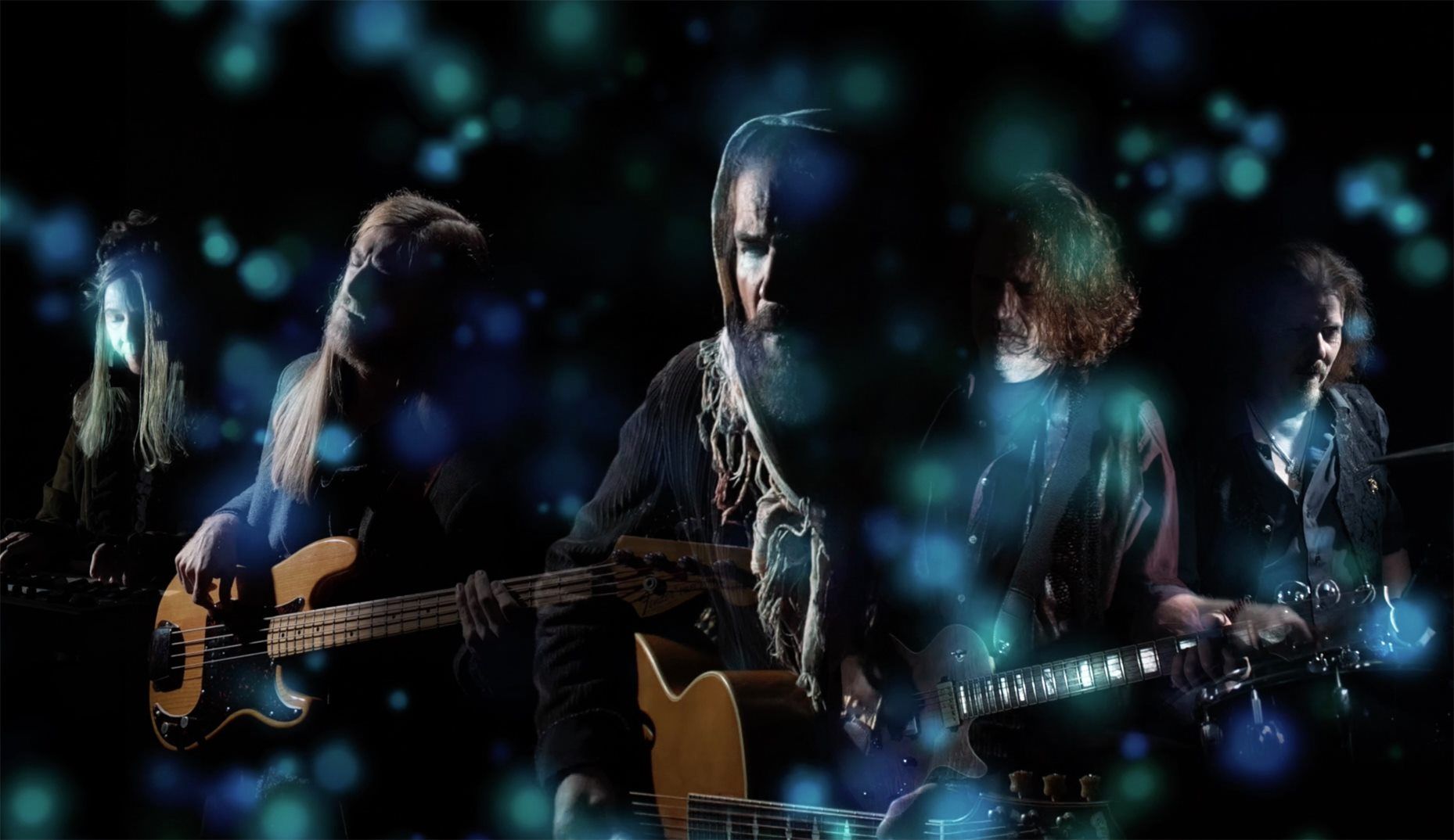 From the Towne Crier stage straight to your Living Room!

Tickets are on sale now for 'A Very Slambovian Christmas.' We will be filming our much-loved Christmas show in advanced and will be airing the broadcast on December 18th at 8:30 PM EST. This will be a full-band production of our entire Christmas show.

If you've never seen our Christmas show, now is your chance. Expect Christmas songs “with a Slambovian "twist” and rockin’ original seasonal tunes for a fun ‘outside the box’ holiday show.

The Slambovian Circus of Dreams 'Very Slambovian Christmas' show is guaranteed to 'flip your switch' and spark the holiday
spirit! 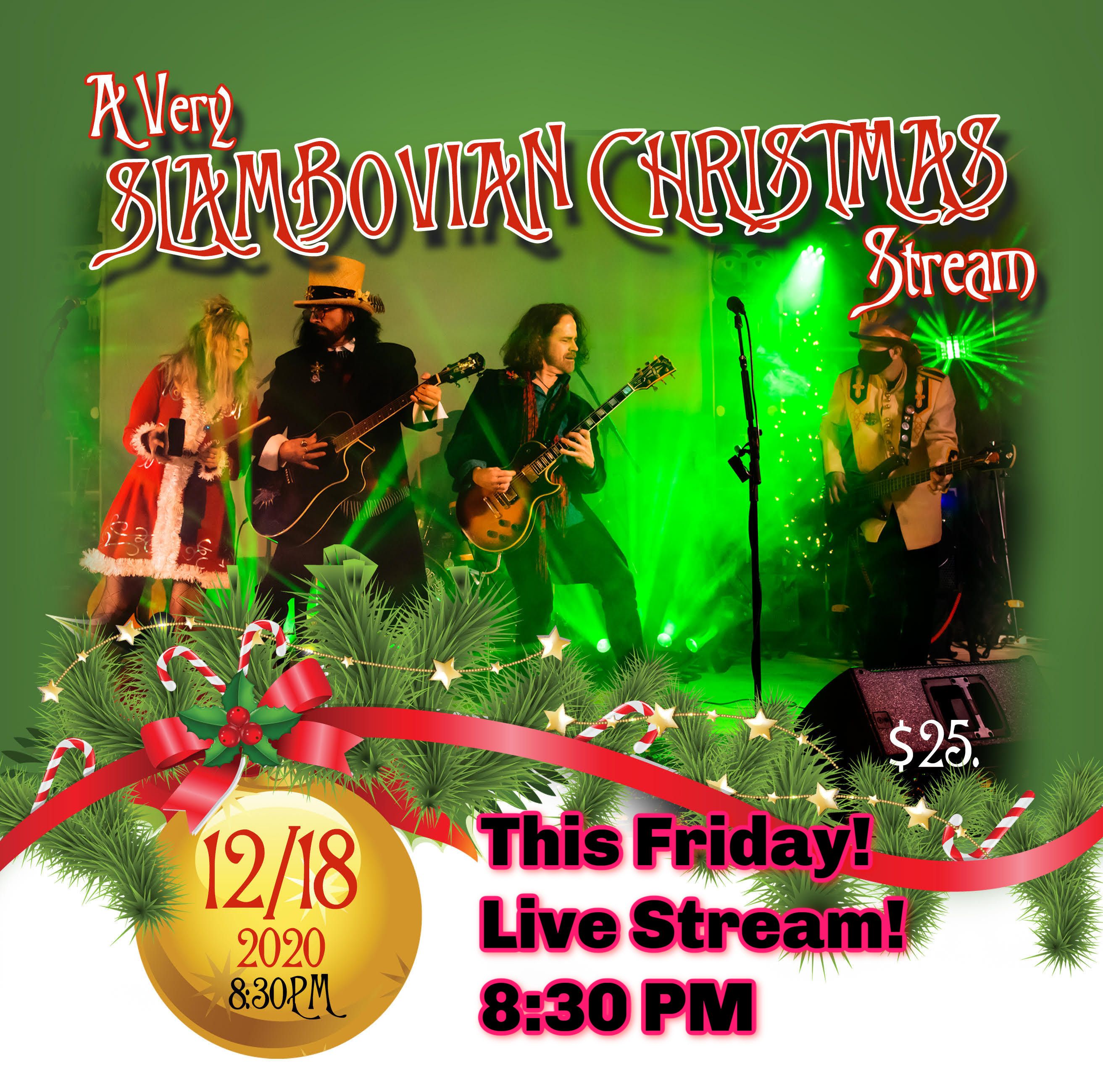 LISTEN TO ’EVERY LITTLE LIGHT’ - HOLIDAY SINGLE ON SPOTIFY: Every Little Light 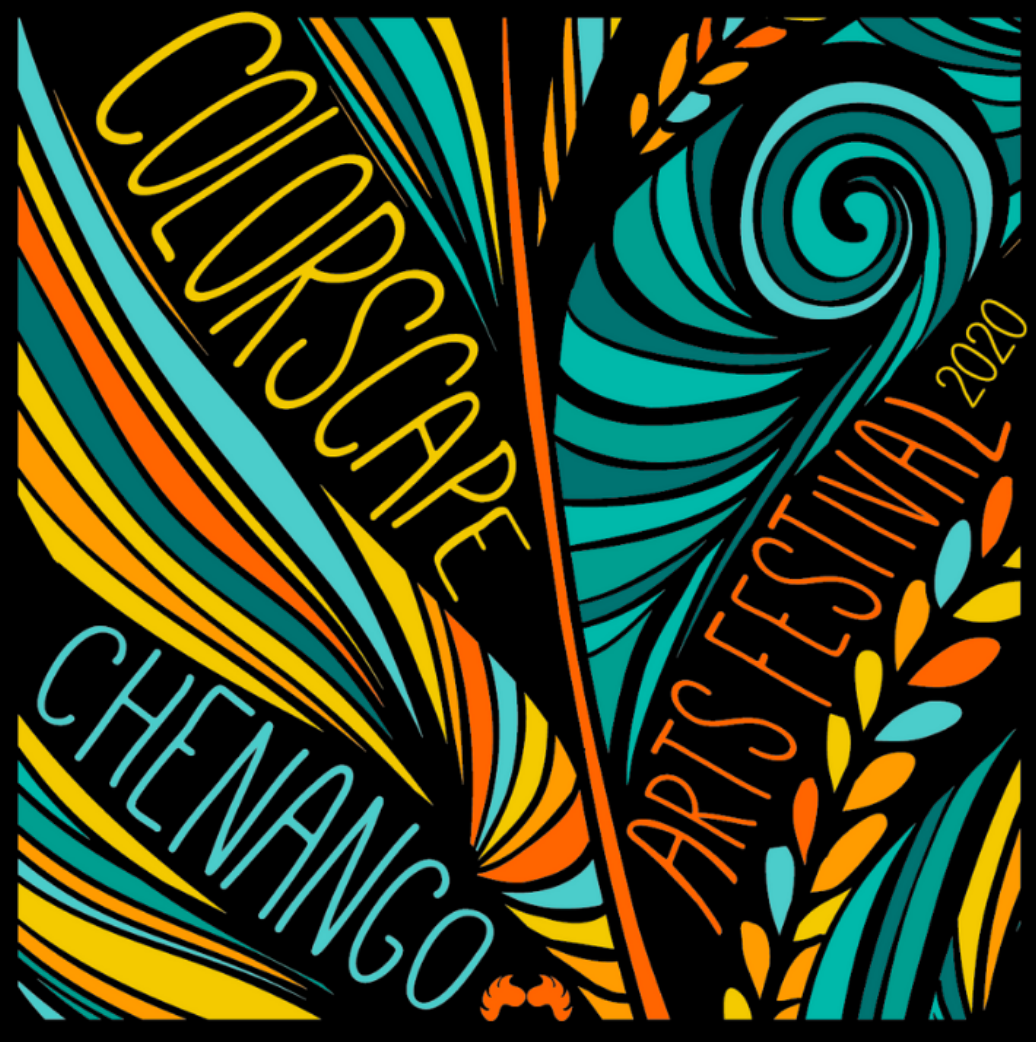 September 12/13 marks the 26th Annual Colorscape Festival, traditionally held in Norwich, NY. This year's festival will be VIRTUAL. Colorscape will be broadcasting from 11-5 both days. Juried artists, performers (The Slambovian Circus of Dreams, Adam Ezra Group, and more) and a variety of arts activities. We've put together two super exciting sets plus a few fun extras! Viewing links will be posted HERE. 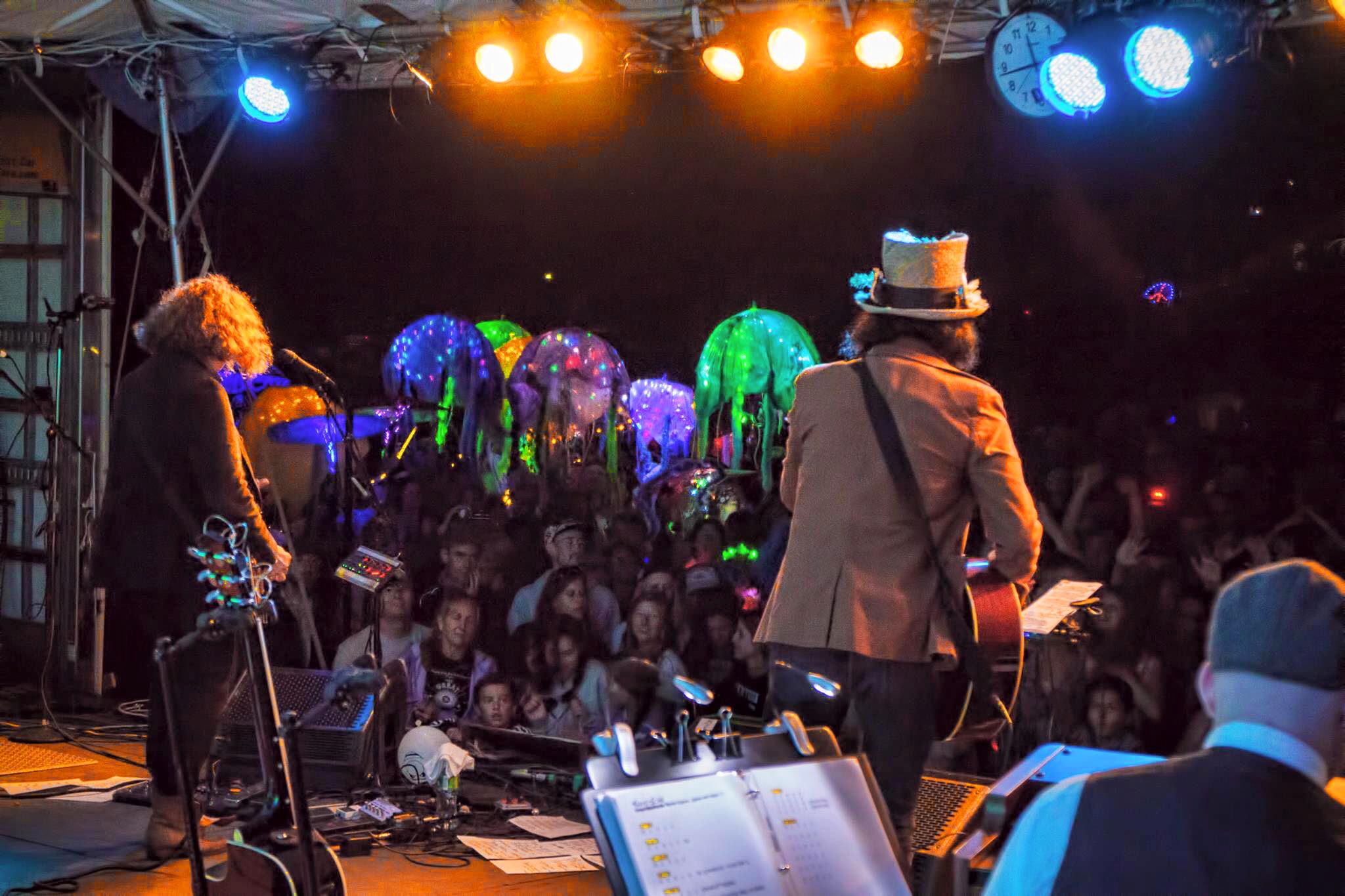 It's festival season - who knew it would be a chance to attend shows from the comfort of your own home! No mudslides, bugs, traffic, sunburn - just a really chill Falcon Ridge Folk 2020 VIRTUAL Festival this weekend! This is exciting news for those of you who have never attended - a chance to see what this special festival is all about. Four days of streaming sets from forty-one artists. The team putting this together are creating a 'curated with love' experience for viewers. The festival community, culture, vibe and tradition is being presented to you in a way you could never usually see, with messages from longtime vendors, campers, former artists, and iconic festival personalities such as "the ICCCCCE man!"

🎪Full Schedule and Line-up can be found HERE. 🎪

You can see us appear in three performances:
Friday Dance Tent set, the Saturday Main Stage, and for the first time the Family stage. The Dance Tent and Main Stage sets will include some fantasic archival footage from 2013 and 2018.

The Family Stage is where 'Slambovian Storybook Theater' makes its debut with Joziah performing songs from two musicals he wrote. Aesop's Fables - The Musical and Fat Horse & Slim were produced/performed for Broadway's Circle In The Square Theater in New York City.

The broadcasts are free to access and will be archived for replay. The festival will be collecting donations via Paypal and Venmo to help pay the artists.*

*The Slambovians will be donating a portion of earnings from this festival to The Towne Crier, our hometown venue. Owner Phil Ciganer has been a major supporter of the band from the beginning and was instrumental in getting us booked at Falcon Ridge years ago. The Towne Crier, like many small venues, is seeing some tough times right now, let's support Phil and the festival with this performance!

or from the Venmo app: @FalconRidgeFolks

'A Box of Everything' - New Quarantine Video!

Dear fans, friends and tribe members,
During the recent weeks of the COVID-19 quarantine, the band filmed a version of ‘A Box of Everything’ from our basements for you as a gift.

We felt it was important to mark the unprecedented time we are in together with something beautiful, hopeful, and unlike anything we have done before ....Special thanks to Matthew Abourezk who led the project and put in hundreds of hours organizing footage and performances by the separated band members, with Sharkey McEwen pulling together the audio and making it magic.

For those of you who feel particularly inspired by this production, you can visit the Slambovian Tip Jar:
PAYPAL: paypal.me/Slambovia
VENMO: @slambovia

May 20 is World Bee Day! Why May 20? Anton Janša, considered to be the pioneer of modern beekeeping practices, was born in Slovenia on this day in 1734. The purpose of World Bee day is to raise awareness of the incredible importance of bees in our food chains and ecosystems. It's a topic we're all learning more about in Slambovia and one that is near and dear to our hearts.

If you are interested in knowing more, check out some of the links below. Happy World Bee Day!

Information about World Bee Day from the United Nations

......and of course, if you want to see our short animation for "I Know Where the Beez Have Gone," here it is:

Hear the full live version in the video below with Beez producer Dio Tadin joining the band onstage.

Although there is never a quarantine in Slambovia, we are bound by the rules of this Earth plane to stay home. We made a little something for you in the meantime. So get a cup of tea, relax, and enjoy a moment in Slambovia.