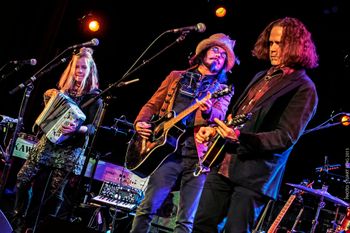 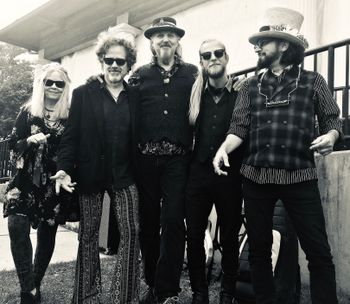 A rootsy rockin' psychedelica, The Slambovian Circus of
Dreams have been expanding the borders of the Americana
genre with their fantastic stories and performance since the late
90’s in Sleepy Hollow, New York. Their connection with
audiences at shows taps into a greater human-ness and
captivates with charismatic band leader Joziah Longo center
ring presiding... Joined onstage by bandmates Tink Lloyd
(accordion, cello, mandolin, flute) and the guitar-slinging skills of
Sharkey McEwen, the Slambovians create a show that is
constantly evolving "with a little help from their friends". 2022’s
line-up features RJ MacCarthaigh (bass, keys, sax), Bob
Torsello (bass), and Matthew Abourezk (drums). Elements of
Dylan, Bowie, Incredible String Band, Syd Barrett and The
Waterboys flavor the musical mix (Waterboys co-founder
Anthony Thistlethwaite is on the band’s new album). Add a
good dose of Woodstock-era psychedelia framed in solid
songwriting, and you have it. Touring the US from February of
2022 in support of their new release, A Very Unusual Head, the
band has a full schedule touring here and in the UK headlining
the Wickham Festival, Fairport’s Cropredy Festival, and more.

Pickard (producer Tall Heights, Pico Romanesque) the songs
and musical escapades of the band make for a sonically
beautiful, creative and adventurous album.
Inspired by the surrealist painters and Dylan as a 12 year old
growing up in Philadephia, Longo chronicles a bit of that journey
honoring those who offer an intellectual/creative escape hatch
needed to sort life’s big questions. A Very Unusual Head is the
band’s sixth studio album and is set for release January 21,
2022 on Storm King Records.

“They take the stage by storm!” – NY Times

"They're not just a band. That's like saying the Bible is just a
book..." – Fairfield County Weekly

“Longo is an awesome songwriter” – Garth Hudson, The Band

“Simply one of the finest American bands” – All Music